By Ross A. Hauser, MD

The name Gustav A. Hemwall most likely doesn’t ring a bell to the average American. Even those new to Prolotherapy might not know who he was. You will not see his name in lights or read about him in the paper. He was a humble man who never sought out his own glory, only the glory of the one true God that he served. Perhaps the success of a man should be measured not by fame or fortune, but by whether their work on earth continues after they die.

Here are some of the accomplishments of Gustav A. Hemwall, MD, written 10 years after his death.

Founded by Reverend Everett Swanson in 1952, Compassion began providing Korean War orphans with food, shelter, education, and health care, as well as Christian training. Dr. Hemwall was on the initial board that helped Reverend Swanson with the work he started. Compassion International exists as a Christian child advocacy ministry that releases children from spiritual, economic, social, and physical poverty, enabling them to become responsible, fulfilled, Christian adults. This organization exists with a budget of over 90 million dollars, helping orphaned children all over the world. For further information, please go to www.compassion.com.

Dr. Hemwall served as president of the board since its inception until he passed away in 1998. The Institute in Basic Life Principles (IBLP) was established by Bill Gothard in 1961 for the purpose of introducing people to the Lord Jesus Christ. It is dedicated to giving individuals, families, churches, schools, communities, governments, and businesses clear instruction and training on how to find success by following God’s principles found in Scripture. These goals are accomplished primarily through seminars, educational programs, printed literature, and the operation of centers to facilitate training. For further information, please go to www.iblp.org.

Dr. Hemwall was involved in the establishing of this organization, as well as serving on its board. In 1977 he received its highest honor, The Servant of Christ Award. The Christian Medical & Dental Association exists to motivate, educate, and equip Christian physicians and dentists to glorify God by living out the character of Christ in their homes, practices, communities, and around the world. For further information, please go to www.cmda.org.

Dr. Hemwall learned Prolotherapy from the person who coined the term “Prolotherapy,” George S. Hackett, MD, in the 1950s. Dr. Hemwall helped form the Prolotherapy Association in the 1960s and started taking doctors to perform Prolotherapy in impoverished areas of Honduras. Some of the doctors that went on these mission trips are Jeffrey Patterson, DO, Rodney Van Pelt, MD, as well as myself, Ross A. Hauser, MD. Dr. Hemwall did this for over 30 years. He started the Hackett Foundation in 1969, which was committed to promoting Prolotherapy and training doctors in Prolotherapy. This foundation continues through the leadership of Dr. Patterson. It has expanded to now serve several countries to give Prolotherapy care to those unable to afford the services, as well as train doctors in Prolotherapy, with the hope of getting Prolotherapy established in these other countries. This foundation has been appropriately renamed the Hackett-Hemwall Foundation. For further information please go to www.HackettHemwall.org.

As surgery became more and more the norm in the 1960s through the 1980s, there was one main voice that kept Prolotherapy going. That voice was Gustav A. Hemwall, MD’s voice! It is possible that Prolotherapy might have vanished if not for the tenacity of this man. He was convinced that it worked and was committed to not only treating people with Prolotherapy, but training doctors to perform the therapy. He made enough “Prolotherapy disciples” that upon his death in 1998, at the age of 90, Prolotherapy has continued to prosper. Besides more books being written on the subject, research papers being published, and doctors being trained in it, now a medical journal, this journal, is devoted to educating the world on the life-changing effects of Prolotherapy. I am sure that Gustav A. Hemwall, MD, my mentor and whose medical practice I continue to run, would be very, very happy! 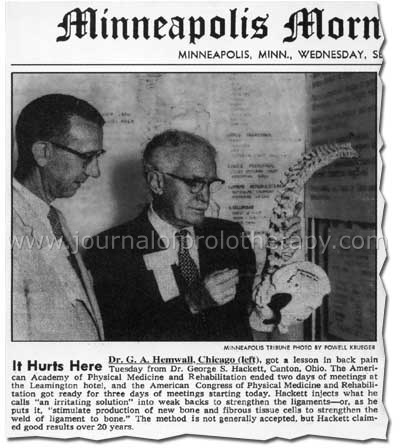 Though this is the last one I will mention, family was certainly the priority in Dr. Hemwall’s life. He told me one story that occurred early in his career. “Most of the doctors at the hospital were joining the country club. I had no interest in joining the country club. It would cost me precious time with my family!” Dr. Hemwall was married to Helen for 65 years. They fulfilled “til death due us part.” They had four daughters. The family was, and is, still very close.

These are just a small sampling of Gustav A. Hemwall, MD’s many accomplishments. If you have a great Dr. Hemwall story to tell, please write to me at: hauserr@journalofprolotherapy.com.

Here is one Dr. Hemwall story. On July 12th, 1993, I was running real fast around the office, doing three things at once. Dr. Hemwall, very humbly gave me this paraphrase of the 23rd Psalm. Instead of it starting out, The LORD is my shepherd, I shall not want, it starts out The LORD is my pacesetter, I shall not rush… (See Figure 1.) Those who knew Dr. Hemwall, understood that worry and rushing were not part of his personality. He taught me in the bible it never said that Jesus was in a hurry. Yet at the end of Jesus’ life he said “It is finished.” Wow what a testimony for not rushing around!

In honor of Dr. Hemwall, the Journal of Prolotherapy will be setting up an award in his honor. If you would like to nominate someone who has been influential in the field of Prolotherapy and helping people relieve their pain, please let us know.