This is a summary review of the December 2021 paper Lumbar instability as an etiology of low back pain and its treatment by prolotherapy: A review in the Journal of Back and Musculoskeletal Rehabilitation. (1)

BACKGROUND: Low back pain is a significant spinal disorder that affects much of the population at some point during their lives.

OBJECTIVE: While proper diagnosis is key, diagnosing the underlying cause of low back pain may often be unclear.

METHOD: In this review article, we discuss lumbar instability as an etiology of low back pain and its treatment by prolotherapy.

RESULTS: Spinal ligaments may be an underlying culprit in the development of lumbar instability with resultant low back pain and associated disorders.

CONCLUSION: In these cases, adequate treatment consisting of non-biologic prolotherapy or cellular prolotherapy, including platelet rich plasma (PRP), can be beneficial in restoring spinal stability and resolving chronic low back pain. 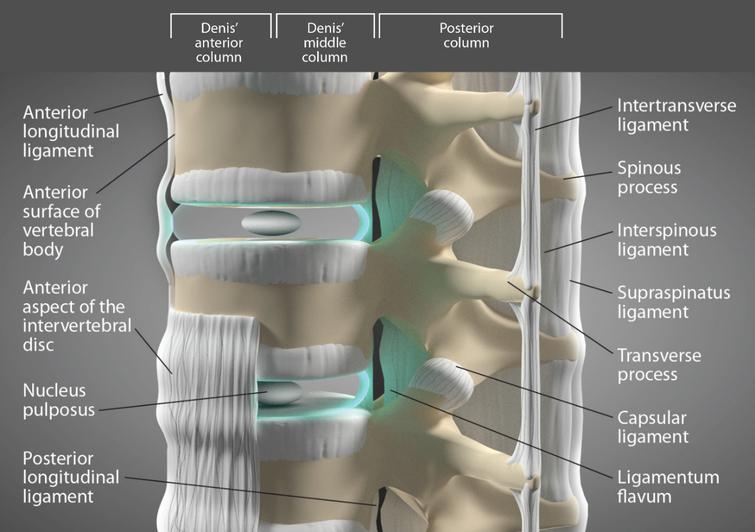 Stabilizers of the lumbar spine

The Denis model divides the spine into 3 columns. The first column is made up of the anterior longitudinal ligament and the front half of the vertebral body and disc; the middle column consists of the back half of the vertebral body and disc, plus the posterior longitudinal ligament; and the third (posterior) column is made up of the facet joints, the ligamentum flavum, and the interconnecting ligaments of the posterior elements. The sacrum and its surrounding ligaments form a foundation of structural integrity for both the lumbar spine and posterior pelvic ring, allowing a seamless transition of force from the upper body to the lower extremities [11]. Although the spine is still usually considered stable when only one of the columns has been disrupted, this may not remain so because any looseness of the ligaments in the posterior column can act as a springboard for degeneration of a second column.

Activity- and age-related low back problems do not typically arise immediately after a traumatic event, but instead begin to develop once ligaments start to creep (tendency to slowly elongate) after prolonged stretching.

Causes of low back pain

Non-specific low back pain is a leading contributor to disease burden worldwide and affects people of all ages [12]. When the etiology of the pain is unknown, or a person is given an inaccurate diagnosis, unnecessary spinal surgeries or other invasive procedures are more likely to occur, and the overuse of opioids and imaging will continue to be a widespread problem. Diagnosing a person’s low back pain can be difficult to determine since the lumbar spine, like the body itself, consists of many components capable of generating pain and does so via a set of complex pain patterns [14]. 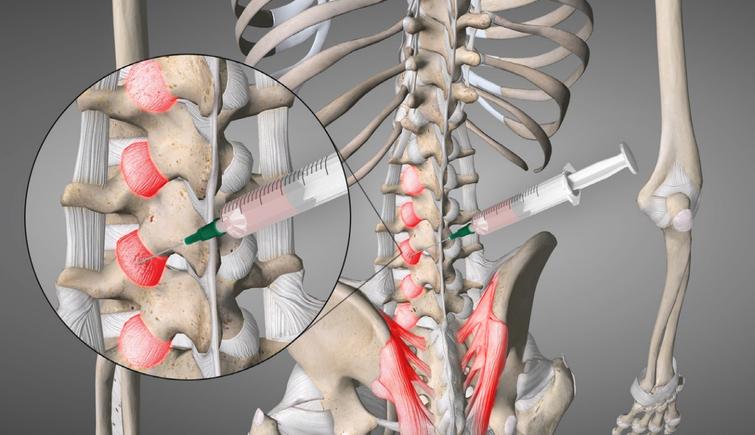 Prolotherapy is a regenerative injection treatment that uses various biological substances to initiate an inflammatory healing cascade, mimicking the body’s own response to repairing musculoskeletal injuries. Prolotherapy treatments can be either non-cellular based (d-glucose/hypertonic dextrose) or cellular-based (platelet rich plasma [PRP] and mesenchymal signaling cells/stem cells), the former of which is obtained via a venous blood draw, and the latter via a small volume liposuction or bone marrow harvesting. In the United States, the practice of regenerative medicine, including prolotherapy, is currently limited to using autologous mesenchymal stem cells, which must be obtained and used during the same procedure with little manipulation [16]. Generally, cellular-based prolotherapy is reserved for more severe cases of ligament damage/instability and spinal joint degeneration.

A study into the use of PRP for facet joint pain examined the results of guided injections of PRP into the lumbar facet joints of 19 patients. The study found that PRP had beneficial effects which improved over time, with 15 of the 19 patients experiencing significant pain reduction by 3 months [21]. In a subsequent randomized prospective study with a larger cohort of 46 subjects, the same lead author compared the results of facet joint injections using either PRP or anesthetic and corticosteroid. At the 1-month mark, 80% of subjects in the corticosteroid group were satisfied with the results of the procedure, but this declined to between 20% and 50% after 6 months. Conversely, the subjects in the PRP group had an increase in satisfaction over time, leading the authors to conclude that PRP was the superior treatment [22]. As the facet joint capsular ligaments loosen, the spinal segments begin to flex (bend forward) more, though imperceptibly to us, when a person leans forward, sits, or lifts. Over time, this results in several possible adaptations, the first of which is disc degeneration.

In an editorial, a board-certified physician in family medicine whose specialty is pain management made several points about treatment of low back pain with prolotherapy [43]:

Given the widespread prevalence of spinal disorders, clinicians should understand ligaments as a causative factor for lumbar spinal instability resulting in chronic and worsening low back pain. Degenerative spine conditions are initiated by the development of instability within the PLC, most notably the facet joint capsular ligaments. In response, the body makes adaptations trying to stabilize the spine, which are initially protective but eventually become harmful (e.g., bone spurs). Without addressing the instability, progression of degenerative spinal conditions with low back pain will continue.

Clinically speaking, spinal stability is the ability of the spine to maintain its alignment during loading, and to protect the neural structures it encloses without causing pain. It is the collective job of the bones, muscles, discs, and ligaments to maintain their alignment of the spinal column so the spinal cord and nerves remain protected. If the spine no longer has properly functioning biomechanical properties, however, clinical stability is lost, giving rise to spinal instability and pain.